Roberto Mancini took his mind off Manchester City’s shock 3-1 defeat to Southampton by returning home to Italy to witness his former club Sampdoria secure a 3-1 victory over Roma.

The visitors axed Zdenek Zeman last week after a 4-2 reverse at home to Cagliari, but new boss Aurelio Andreazzoli was unable to turn around the capital club’s fortunes with Mancini watching on from the stands.

The 48-year-old was quick to brush aside any transfer rumours that might have developed from his visit, although he did concede an admiration for Sampdoria striker Mauro Icardi, who scored the final goal of the fixture.

“I only came to watch the match,” Mancini said. “Roma were better in the first half, Sampdoria in the second. Icardi scored a great goal and moved around the pitch very well. I liked him a lot.”

Coming into Manchester for a soggy Sunday afternoon, meanwhile, was Real Madrid boss Jose Mourinho, who watched Manchester United beat Everton ahead of their crunch Champions League tie on Wednesday.

The ‘Special One’ might hope to spend more time at Old Trafford in the future and happily conducted an interview with MUTV before United comfortably saw off Everton to move 12 points clear at the top of the Premier League. 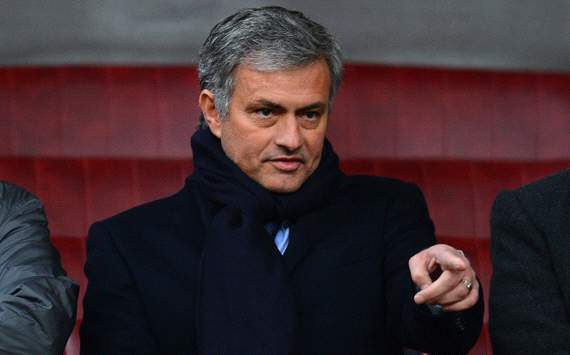 “One day, this will all be mine…” | Mourinho may be eyeing more than his next opposition

The defending La Liga champions themselves had warmed up nicely with a routine 4-1 over Sevilla at the Santiago Bernabeu on Saturday night.

“I had a chat with Mourinho [before the game],” Sir Alex Ferguson told Sky Sports. “He had a great result yesterday.

“It should be a fantastic game on Wednesday, I just hope we can get the team out on the pitch that I want.”