The Bianconeri have agreed personal terms with the Argentina international, who represents the missing link in the Old Lady’s pursuit of Champions League

They sang it again after the final game of last season – but with a twist. The name of one Argentine idol had been replaced with that of another: Gonzalo Higuain. It was easy to understand why. Higuain had just scored a hat-trick against Frosinone and, in doing so, he had done something nobody – not even Maradona – had done before: break Gunnar Nordahl’s goals record for a single Serie A season (35).

However, Higuain is now set to do something else that Maradona never did: leave Napoli for another Italian team.

In 1990, after Maradona had led the Partenopei to a second Scudetto in three years, he was approached by Silvio Berlusconi, the president of his club’s great rivals, AC Milan.

The No.10 even agreed to meet with the future Prime Minister of Italy. He was offered 10 billion lire a year (€5.2m) to move to San Siro. However, Maradona told Berlusconi, “I will never play for a team in Italy that is not Napoli. I cannot betray the expectations that the Napoli fans have of me.”

Berlusconi, unsurprisingly, has a different take on why the proposed deal never materialised. “I almost signed Maradona but he had become Napoli’s captain and I don’t buy [other clubs’] captains,” he claimed. Both men’s memories of that meeting cast them in a favourable, noble light but the reality is that they probably just couldn’t come to an agreement over money. 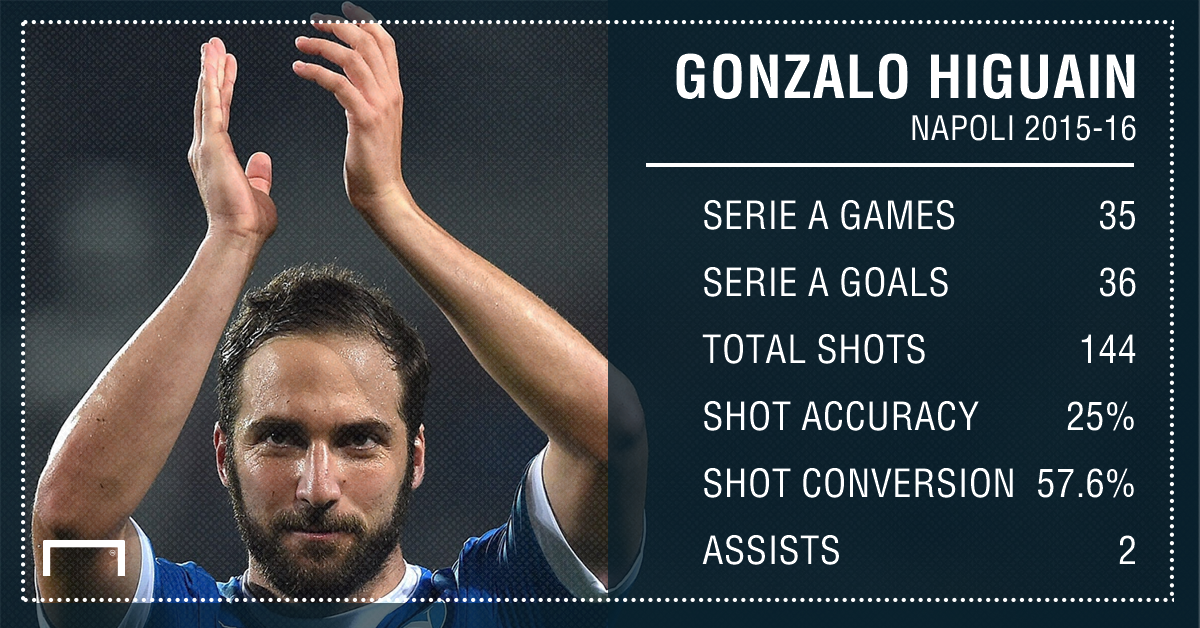 At the end of the day, in Italian football, when money talks, a player walks. That is why Higuain is on the verge of moving to Turin. The 28-year-old has already agreed personal terms with the Bianconeri and Juve must now either meet the striker’s buyout clause of approximately €94 million or agree a player-plus-cash deal with Partenopei president Aurelio De Laurentiis, with Roberto Pereyra and Daniel Rugani already being touted as possible makeweights in a deal that would have far-reaching consequences.

Indeed, the reigning champions acquiring the current capocannoniere would render the Serie A title race a foregone conclusion. That is a given. Juve have won the last five Scudetti. They ultimately won last season’s despite giving everyone else a six-point head start, after losing their first two league games for the first time ever.

Of course, there are no certainties in football but when it comes to scoring goals in Serie A, Higuain is as close to a guarantee as one can get. He has struck 71 times in just 104 appearances in Italy’s top flight. He is thus the answer to Juve’s search for a prolific No.9.

The Bianconeri haven’t had a capocannoniere winner within their ranks since Alessandro Del Piero netted 21 goals during the 2007-08 season. However, Juve’s objective is no longer domestic domination. They want to conquer Europe. With Higuain on board, that would be an entirely achievable target.

As Euro 2016 underlined, the Bianconeri boast the best backline in the world, one that is only going to be strengthened by the imminent arrival of Medhi Benatia from Bayern Munich. Meanwhile, the addition of Miralem Pjanic to a squad containing Paul Pogba, Claudio Marchisio and Sami Khedira means that Massimiliano Allegri will be in a position to field a high-energy midfield of both imposing power and subtle craft.

As for the attack, the prospect of Paulo Dybala working in tandem with compatriot Higuain is one that will strike fear to defences across Europe – and not just Italy.

Indeed, if Juve manage to persuade Pogba to remain in Turin for one more year – and the Frenchman will be excited by the prospect of playing behind the best No.9 in Serie A – they will have a starting 11 to rival any side in Europe, including Barcelona and Real Madrid.

Losing Alvaro Morata was a blow for the Bianconeri. The Spanish striker was a player of enormous potential. However, he was not yet the finished article. Higuain is – and that is why the hearts of Juve fans are thumping right now.