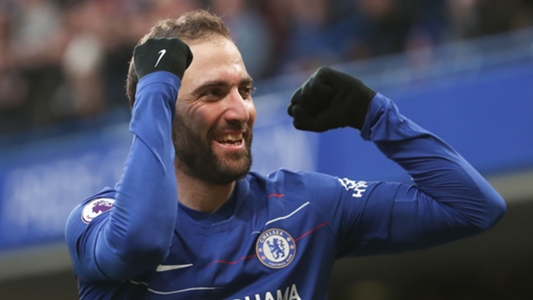 Gonzalo Higuain will be a success for Chelsea as long as the team’s creative players can provide him with service, according to Antonio Rudiger.

The Argentine striker joined the Blues on a six-month loan in January following a protracted transfer saga with his parent club Juventus and AC Milan where he spent the first half of the season.

He netted his first Chelsea goal during a 5-0 rout of the Premier League’s bottom side Huddersfield earlier in February.

And German defender Rudiger has backed his new team-mate to come good for the Blues as the team aim to fight their way out of the rut of form that has seen them lose three of their last four league games.

“Everyone knows Gonzalo is a goalscorer,” Rudiger told the club’s official website.

“You have to adapt to things but he played in Spain and he played in Italy and he has always mainly played for big clubs and he knows the pressure.

“Of course at the moment it is difficult for him because the team has been struggling but still he is for me a quality striker and if he gets the chance and he gets the service, he will be great for us.”

Rudiger played in defence for Roma in 2015-16, the year that Higuain registered his best goalscoring season with an astonishing 36-goal haul from 35 games for Napoli in Serie A.

And the Argentina international continued to torment Italian defences after moving to Juventus in 2016, netting 40 Serie A goals across two seasons as the club won back-to-back titles.

He struggled during his six-month loan at Milan, scoring just eight goals and suffering an uncharacteristic two-month goal drought before bringing his San Siro nightmare to an end by joining Chelsea.

The Blues are currently flagging in their bid to return to the Champions League next season, having surrendered their grip on fourth place, as well as being knocked out of the FA Cup by a resurgent Manchester United side.

Arsenal have also moved above them in the race for the top four.