As the Portuguese is reunited with Didier Drogba and Wesley Sneijder on Wednesday, we imagine a dream team made up of his brightest stars at Porto, Chelsea, Inter and Real Madrid

He has worked with the very best. Jose Mourinho has coached some of Europe’s finest in the last decade, starting with his great Porto side which stunned the rest of the continent by winning the Champions League in 2004. He then guided Chelsea agonisingly close to their holy grail and dominated domestically, led an all-conquering Inter outfit which made history, and now a Madrid XI aiming to reach a third straight semi-final in the game’s premier club competition.

In order to advance to the last four, Mourinho’s men must beat Galatasary, but standing in their way are two of the coach’s finest former charges – Didier Drogba and Wesley Sneijder. So as the pair set out to upset the man who was their mentor at Chelsea and Inter, respectively, Goal.com picks a possible dream team from the Portuguese’s players at Porto, Chelsea, Inter and Madrid.

It is impossible to pick such a side without leaving out a wealth of top talents, players considered to be among the world’s finest. Yet the idea was not to select the 11 best players per se, but the greatest line-up of footballers in their time spent under Mourinho’s guidance. And after much deliberation, it was decided that this team would play in a 4-3-3 formation, the system favoured by the Portuguese at both Porto and Chelsea, and not his current 4-2-3-1. So here goes…

Four men fight it out for the starting spot in goal. Vitor Baia was an experienced head and a natural leader at Porto, while Petr Cech proved a revelation at Chelsea and Julio Cesar stepped up at Inter as Mourinho won it all with the Milanese outfit. But the best of the bunch is Iker Casillas. Currently sidelined and with his route to the Madrid first team potentially blocked by the fine form of emergency signing Diego Lopez, Casillas remains the best goalkeeper in the world and, therefore, he is an obvious choice in this side. 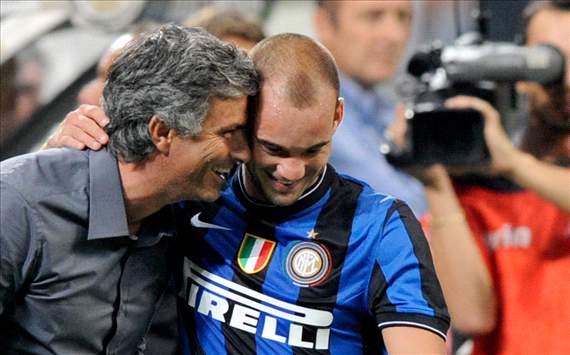 There are tough decisions to make throughout the rest of the team. Candidates for the right-back role include Maicon, who was at his brilliant best under Mourinho with his breathtaking attacking play in the treble-winning campaign of 2009-10, his former Inter team-mate and club legend Javier Zanetti and Madrid’s Sergio Ramos. Here, Zanetti gets the nod due to his brilliant performances up against Lionel Messi in Inter’s 2010 Champions League semi-final with Barcelona (albeit on the left), and his overall consistency on both flanks during the Portuguese’s two successful seasons in Italy. Paulo Ferreira and Alvaro Arbeloa would probably not even make the squad.

In central defence, John Terry and Ricardo Carvalho edge out a number of other brilliant defenders, including Ramos, Pepe, Lucio, Walter Samuel and Marco Materazzi. Carvalho was a rock for Mourinho at Porto and later formed an excellent partnership with Terry at Stamford Bridge. His first season at Madrid was also solid, although he is now in his twilight years and can no longer compete for a first-team place at the Santiago Bernabeu. Meanwhile, if Raphael Varane continues his current progession, the young Frenchman is likely to become better than any of the above, while Ramos can consider himself unlucky to miss out following his fine form since switching to the centre in 2011-12.

With Zanetti on the right, Ashley Cole starts at left-back in this team. The England full-back upset Arsenal by meeting Chelsea officials publicly and then moving controversially across the capital, but went on to become perhaps the best left-sided defender in the world under Mourinho. He simply has to be in this team. Marcelo is another alternative, but Mourinho does not always appear to trust the Brazilian defensively. Fabio Coentrao and Christian Chivu make up the numbers.

Claude Makelele is the logical choice as the defensive midfielder. The former France international was so effective in his position ahead of the defence at Chelsea that the position was named after him. Although not gifted technically, his tireless work-rate, ball-winning abilities and simple distribution to those around him make him a must in this side. In a dream Mourinho XI, the ‘Makelele role’ could only be filled by the man himself. So Sami Khedira, Thiago Motta and Costinha, the excellent defensive midfielders at Madrid, Inter and Porto, respectively, all miss out. 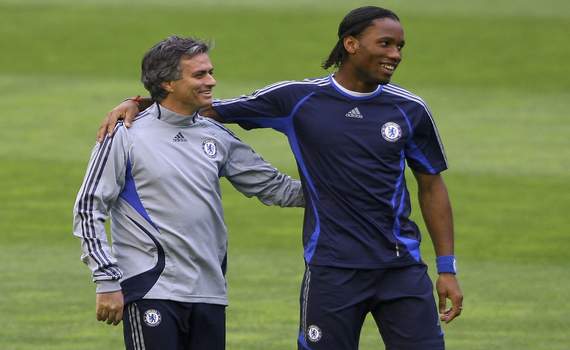 Brothers in arms | Mourinho and Drogba at Chelsea

With Makelele dropping deep, Frank Lampard would provide the goals in midfield. At Chelsea, Mourinho described the England midfielder as “the best in the world” and considered bringing him to Madrid early on in his tenure. Xabi Alonso is unfortunate to miss out here, while Inter’s Esteban Cambiasso and Porto’s Maniche were other solid candidates, but Lampard’s greater goal rate – an aspect of his game he improved dramatically under Mourinho, hitting 15, 19 and 20 in his three full seasons with the Portuguese after managing just eight the year before – wins him a starting spot.

In the playmaker position, the options are sublime. Wesley Sneijder was so important for Inter in 2009-10, and terribly unlucky to miss out on the 2010 Ballon d’Or after also leading Netherlands to the World Cup final in South Africa. The Dutchman has since faded and struggled with injury, but under Mourinho for those two terms at Inter, he was the world’s best in his position. Deco employed a similar role at Porto and just misses out, along with Mesut Ozil and Kaka, whose best years came before his association with Madrid and his current coach.

And then there are the forwards. Cristiano Ronaldo is included of course, having taken his game and his goalscoring to new levels under his compatriot. And the Portuguese is joined in attack by two more central strikers, Diego Milito and Didier Drogba. The Ivorian is the archetypal Mourinho centre-forward and a player who became synonymous with the Portuguese’s Chelsea side. Milito played an astonishing role in Inter’s treble of 2009-10, scoring both goals in the Champions League final victory over Bayern Munich, as well as netting crucial strikes in the knockout rounds, hitting the winner in the Coppa Italia and the goal which clinched Serie A as well. On the back of all of that, Milito must be in this side. Arjen Robben and Joe Cole both miss out despite good form at Chelsea, along with the not-always-convincing Madrid trio Karim Benzema, Gonzalo Higuain and Angel Di Maria, the great Zlatan Ibrahimovic in Mourinho’s first year at Inter, Samuel Eto’o (used in a more sacrificial role by the Portuguese in Italy, on the left flank in his second season) and Luis Figo (whose association with the coach came right at the end of a wonderful playing career).

What do you think or our XI (below)? Too many Blues? Not enough Madrid players? Should Porto have more representatives? Who should be in it? Have you say in the comments section below…