Aurelio Di Laurentiis feels like celebrating. On Wednesday evening, Napoli all but sealed the signings of Gonzalo Higuain and Pepe Reina, prompting the Partenopei’s movie-producing president to announce on Twitter: “On Monday evening we’ll have a big party at the San Paolo.”

When it comes to the European club scene, nothing of note is ever won in July. Nor is an expensive outlay any guarantee of success. Still, De Laurentiis’ current sense of jubilation is understandable.

Of course, on the face of it, such a celebratory mood would be anything but justified. Since finishing second last season, Napoli have lost not only their highly-respected coach, Walter Mazzarri, but also their top goalscorer, Edinson Cavani.

In that sense, the Partenopei should be in dire straits – yet nothing could be further from the truth.

Both Mazzarri and Cavani will be missed, of that there is little doubt. Mazzarri is the man who turned Napoli into one of the most feared counterattacking sides in Europe, with the incredibly-clinical nature of Cavani’s finishing allowing him to do so.

How is it, then, that Napoli now look better equipped to challenge Juventus for the title this season than last? Well, the simple answer is De Laurentiis.

That Cavani wanted to and would leave the San Paolo this summer has been well known for some time now. However, De Laurentiis stood firm when it came to potential suitors. He refused to play ball when asked to lower the asking price, stating time and time again that any interested party would have to pay the buy-out clause. In the end, he banked a staggering €64 million for the Uruguay international.

Hardly surprising then that Rafael Benitez was so drawn to Naples, in spite of the fact that his previous experience of Serie A, with Inter, had proven an embarrassment, with the Spaniard unceremoniously sacked after a very public row with the parsimonious Massimo Moratti over the release of transfer funds.

The former Liverpool boss stated last week that he is no longer bitter about his dismissal, yet he made a point of bringing up the fact that he had been promised players by the Nerazzurri only to be afforded “zero” money to spend.

Therefore, having underlined both his mental resilience and rather useful habit of landing silverware during his short – but undeniably successful – stint at Stamford Bridge last season, Benitez will clearly relish the opportunity to show Moratti what a mistake he made three years go by not giving him the financial backing he demanded. That the man he has succeeded at Napoli is now in situ at San Siro will only intensify the mounting animosity between these two sides.

De Laurentiis has described Benitez as “the most important signing of the summer” – every great production needs a great director, after all. However, the Partenopei supremo knows that it is star names that put bums on seats, which is precisely why he was willing to pay €37m for Higuain.

Both Arsenal and Juventus wanted el Pipita, but neither were willing to cough up quite so much cash for the Argentine. The price may seem exorbitant but his signing still represents a significant coup for Napoli. Higuain, after all, scored 106 goals in 188 Liga appearances for Madrid, which is an impressive tally given how often he was forced to play second fiddle to more celebrated strikers during his seven-year stay at the Santiago Bernabeu. Make no mistake about it: Napoli have a signed a proven, world-class goalscorer in the prime of his career; one with something to prove. 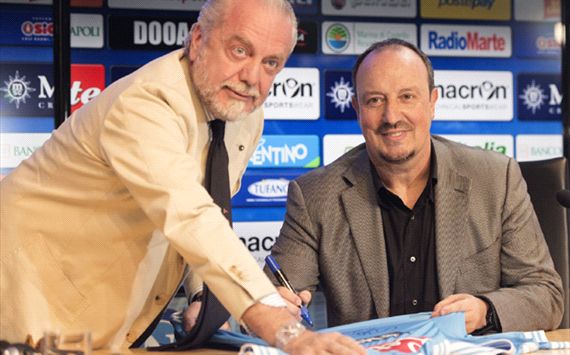 The encouraging thing for the Partenopei is that they have strengthened well elsewhere. Raul Albiol and Jose Callejon have also arrived from Madrid, for a total cost of €22m, and the latter, in conjunction with free-scoring Belgium winger Dries Mertens – a €9.5m signing from PSV – should add quality and, more importantly, goals to an attack that has long been overly-reliant on Cavani.

In addition, Jose Reina and Rafael have joined from Liverpool and Santos respectively, meaning Napoli will have two internationals competing for the No.1 jersey next season, only serving to underline the suspicion that the Partenopei, at last, have the depth to sustain a title challenge.

Indeed, Napoli have signed quality players with something to prove. They offer both class and hunger – two essential ingredients in any championship-chasing squad.

There are those that feel they might still be one or two players short of usurping Juventus at the summit of Serie A but, then again, De Laurentiis has promised that there will be more arrivals at the San Paolo before the summer is out.

Whether that will be enough to keep the party going all season long remains to be seen. But, given how significantly they’ve strengthened so far, there’s every chance that Napoli will have something truly worth celebrating come next May.