With both managers kicking off their first full seasons in charge, it seemed as if neither side knew what to expect from the other, so things began tentatively.

There was a chance apiece in the opening ten minutes, with Tammy Abraham rattling the post from 20 yards, before a stray pass out from Kurt Zouma – misjudging the movement of Jorginho in front of him – gifted Martial a one-on-one, though the new number nine could only find the grateful gloves of Kepa.

The centre-back, fresh from a successful loan spell at ​Everton, looked nervous throughout the first half, and while he got away with his first mistake of the afternoon, his second proved more costly on 18 minutes. He clumsily tripped Rashford in the area, affording the 21-year-old the opportunity to convert a penalty, and he clinically obliged to open the scoring.

​Chelsea looked rattled by conceding the opener so early, and despite the erratic, unsure nature of their game persisting throughout the first half, they came within inches of levelling things up  just before the break, when the marauding Emerson fired an effort off the inside of David de Gea’s near post.

Midway through the second half, however, Chelsea fell to pieces. An Andreas Pereira cross from the right split the central-defensive duo of Christensen and Zouma for Martial to double the lead, before Paul Pogba regained possession almost straight from kick-off to play a perfect chipped through ball into the path of Rashford, whose pace left Cesar Azpilicueta for dead before slotting past Kepa for three.

The rout didn’t stop there, as substitute ​James took a Pogba pass through on goal to put some shine on the scoreline and make absolutely sure of the points.

The first full season of the Solskjaer era kicked off with £130m-worth of new defenders in the back line, as Harry Maguire and Aaron Wan-Bissaka made up half of a new-look back four. Higher up the park, they stayed true to their pre-season promise of pressing high, and that strategy almost yielded the opening goal, with Martial – leading the line sporting his new number nine shirt – intercepting a stray pass on the edge of the penalty area inside the opening ten minutes.

After taking the lead, they showed some grit in holding it into the break, and never really looked in danger of losing their lead after setting up more conservatively for the second 45. They took the resulting chances when they came, and overloaded Chelsea towards the end to record a handsome victory, and get things off to a flying start.

To look at Wan-Bissaka here, you would scarcely believe he was a 21-year-old making his debut against Chelsea at Old Trafford, after arriving for £50m no less. One minor wobble when faced with the introduction of Christian Pulisic aside, the former Crystal Palace man didn’t put a foot wrong all afternoon – showcasing his exceptional positional ability and his reading of the game.

I think I love Aaron Wan-Bissaka

​United placed a lot of stock in his signing, but looks as if he will be the perfect right back for the high-pressing system they hope to use for years to come.

‘Super Frank’  was the chant from the travelling contingent, as the club’s record goalscorer sat in the dugout for is first competitive match, hoping for a win that would turbo-charge the early part of his Stamford Bridge career – as well as eradicating the underlying malaise that accompanied the two-window transfer ban forced on the club earlier this year. While there were no new signings in the squad, however, the starting XI did take on a new look. Mason Mount made his Premier League debut and Tammy Abraham earned his first Premier League start, while Kurt Zouma returned from a loan spell at Everton to partner Andreas Christensen at the heart of defence.

It was a new team in many ways and played like one in the early stages. They looked unsure on the ball and disorganised off it, and deserved to go behind when Zouma impetuously impeded Rashford –  the second instance of notably questionable defending from the Frenchman inside the opening 20 minutes.

It was ultimately some tactical naivety from Lampard that would cost them dearly, however. The new boss opted to withdraw Ross Barkley for the width and pace of Christian Pulisic, and while  that may have seemed grand in theory, their midfield collapsed in on itself and was overrun for the final third of the match.

It was a poor day for Chelsea, but it’s no coincidence that things fell to pieces after the withdrawal of Barkley. 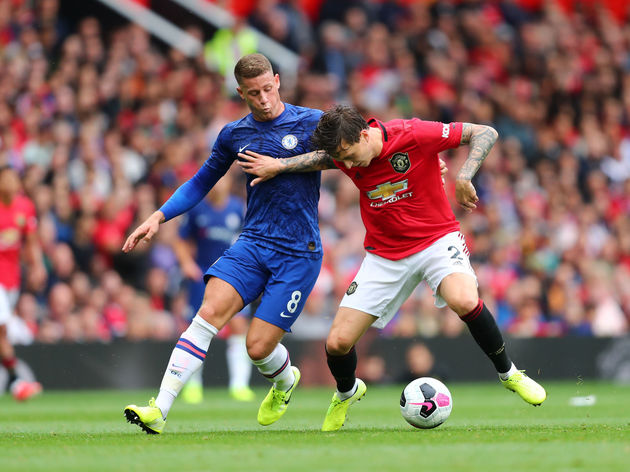 If the Blues are to have any sort of success this season, Barkley will be at the heart of all that is good.

Manchester United travel to Wolves on Monday for what will be another big test for Solskjaer and his side’s top four aspirations. Chelsea, meanwhile, play twice between now and then, taking on Liverpool in the UEFA Supercup on Wednesday before Lampard’s first match at Stamford Bridge against Leicester on Sunday.