Turkish butcher turned internet meme ‘Salt Bae’ was everywhere after Argentina won the World Cup – but now the players’ indifference towards him has gone viral too.

Nusret Gokce has been known by the pseudonym since a video of him pouring salt down his arm over a steak at one of his first restaurants went viral in 2017.

His presence on the pitch at the Lusail Stadium after Argentina’s first World Cup win in 36 years was quickly picked up by social media – especially for the new world champions’ seemingly apathetic reactions to his presence.

Lionel Messi was pictured appearing to try to get away after the Turkish celebrity grabbed his arm, while Lisandro Martinez looked less than delighted to be pictured alongside him holding the World Cup trophy.

A compilation video on Twitter of non-plussed players alongside Gokce has racked up more than 14 million views since it was posted on Monday afternoon.

Gokce posed for photographs on the pitch holding the trophy on his own – something which is against FIFA rules.

“The original Fifa World Cup Trophy can only be touched and held by a very select group of people, which includes former winners of the Fifa World Cup and heads of state,” says FIFA on its own website.

Salt Bae had already played a part in earlier controversy during the World Cup. Brazil’s players were criticised for grandiose celebrations when they visited his Doha restaurant after beating Switzerland in the group stages.

His relationship with FIFA president Gianni Infantino appears to date back several years, with the pair featuring in a 2019 video where he endorsed his Dubai restaurant.

France president Emmanuel Macron – another friend of Infantino – was also seen on the pitch attempting to console Kylian Mbappe after the full-time whistle, leading to similar criticism. 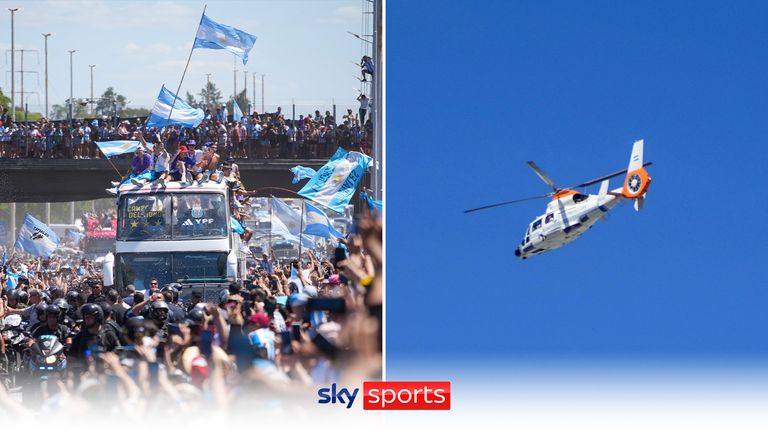 The Argentina squad were forced to abandon their open-top bus for a helicopter after a member of the crowd managed to get onto the vehicle during their victory parade.

The Argentinian FA confirmed the victorious players’ bus tour of Buenos Aires was abandoned due to security concerns on Monday, with the squad instead taking helicopters along the parade route.

The World Cup-winning players were evacuated from the open-top bus as the tour was progressing after a fan jumped onto the vehicle as it drove under a bridge.

The AFA said: “The players of the Argentine soccer team ended the festivities by flying over in a helicopter over the crowd of fans who gathered in the city.

“They made that decision after verifying that they could not continue advancing by bus in the middle of the crowd.”