Mid-table Napoli welcome table-topping Juventus to the Stadio San Paolo as Gli Azzurri look to climb the Serie A table in the second half of the season.

Gennaro Gattuso has not had the easiest of rides since taking over at the helm, subsequently picking up just a single league victory since his tenure began over a month ago. Since that away win over Sassuolo, Napoli have lost all three of their Serie A fixtures against Inter, Lazio and Fiorentina which has seen them slip further down the table.

888 kilometres away in Turin, Juventus have had no trouble retaining top spot in their battle for dominance with Antonio Conte’s Inter side. The Old Lady have won all five of their Serie A fixtures including impressive wins over Udinese, Sampdoria, Cagliari, Roma and Parma which has seen them return to the summit of the table. Sunday’s fixture presents an opportunity for Napoli not only to record their first league win in three attempts, but also to make a statement of intent and claim victory over Italy’s premier side. All that stands in the way is Juventus, who have plans of their own to extend their lead over second placed ​Inter to seven points.

​Napoli’s torrid time with injury continues as Gattuso has a host of first-team players unavailable for selection through injury.

Kalidou Koulibaly, Allan, Kevin Malcuit, Faouzi Ghoulam and Dries Mertens all remain absent ahead of one of ​Serie A’s most anticipated games. Centre-back Nikola Maksimovic could return to the fray following his hamstring injury, although Giovanni Di Lorenzo is waiting in the wings if need be.

Sebastiano Luperto and Fabian Ruiz should return to the starting XI following their absence in Tuesday’s Coppa Italia quarter-final victory against Lazio, meanwhile José Callejon, Lorenzo Insigne and Arkadiusz Milik should all feature in attack. Similarly, Maurizio Sarri has a number of injuries to contend with ahead of Sunday’s fixture.

​Paulo Dybala faces competition from ​Gonzalo Higuain for a starting berth alongside ​Cristiano Ronaldo, although the former was benched against AS Roma, meaning his inclusion from the start is a strong probability.

Matthijs De Ligt and Juan Cuadrado should also return to the starting lineup following their rest in the Coppa Italia quarter-final victory over AS Roma.

Since their return to Italy’s top flight in 2007, these two sides have met on 35 occasions. Honours have been relatively split and Juventus have recorded 18 wins to Napoli’s 12 with the remaining five games ending in stalemate. 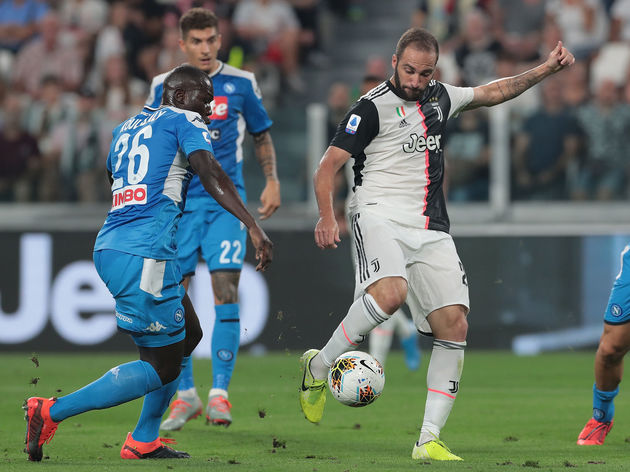 The last three meetings between the two teams have yielded three victories for Le Zebre, most recently beating Napoli 4-3 in an enthralling game back in August. Fixtures between the two sides have traditionally been close encounters, with one goal being the difference eight times in the last nine meetings. There is absolutely no denying that 2019/20 has been a season to forget for I Partenopei. The Blues are currently 14 points behind AS Roma in fourth spot, while they are an astronomical 27 points behind Sunday’s opponents.

Napoli are currently down in 11th place in the league. To put things into context, they have finished second in three of the last four seasons and have not ended a campaign outside of Italy’s top six since 2009. Contrarily, ​Juventus’ fortunes of late have been more than excellent. Since the start of the new year (and Ronaldo’s new barnet), La Madama have been buoyant and have subsequently won their last five across all competitions.

Ronaldo has proved to be instrumental in his sides upturn in form and has found the back of the net 12 times in his last nine outings, taking his total to 19 goals in all competitions so far this season.

The team from Turin have gone on to establish a four point lead at the top of Serie A and will aim to extend that lead with a strong display against Napoli.

Here are how both teams have fared in their last five games.

Despite the differing seasons endured by these two sides, Sunday’s fixture should be a close contest with both sides looking for all three points for very different reasons.

Both teams should get on the score sheet, however, Juventus should possess enough in their locker to overcome a stern Napoli side on Sunday evening.