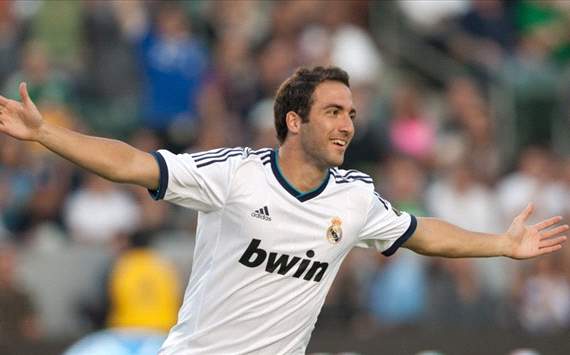 Gonzalo Higuain and Karim Benzema have become the latest Real Madrid players to turn down a move to Paris Saint-Germain after approaches were made by the French club.


The strikers reportedly declined what would have been lucrative moves in order to focus on winning trophies at Madrid, while Les Parisiens have previously been linked with Kaka.

Sheikh Al-Khelaïfi has spent €250m since joining PSG. His dream is to turn the French club into one of the leading sides in Europe and he has already brought in Javier Pastore, Ezequiel Lavezzi and Zlatan Ibrahimovic amoungst others in big money deals.

However, according to Marca, the Qatari was unsuccessful in signing both Karim Benzema and Gonzalo Higuain, even after speaking directly to Real Madrid president Florentino Perez.

Apparently, the mooted offer for French hitman Benzema far exceeded what Madrid had paid Olympique Lyonnais for him.

With PSG labouring to a 2-2 draw to Lorient last night in the opening round of Ligue 1, Al-Khelaifi may not be finished in the transfer market just yet.