​For a large part of Chelsea’s 3-2 victory over Norwich City on Saturday, all that could be heard was: ‘Oh, Tammy Tammy’. The travelling fans were ecstatic with Tammy Abraham, who produced his finest display in a Chelsea shirt to net two impressive goals.

There’s a lot of uncertainty surrounding the Blues this season, but one thing is clear – Abraham is ready to lead the line for Chelsea. 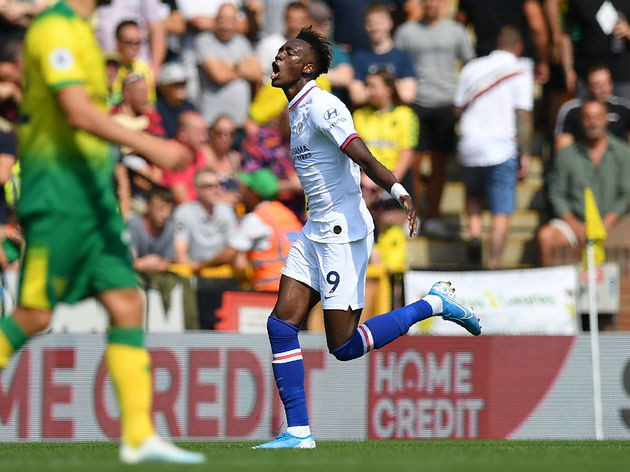 The 21-year-old began the season as Frank Lampard’s starting striker, but quickly became the target of criticism after struggling in his first two outings in the top flight. Meanwhile, ​Olivier Giroud had impressed in the Super Cup defeat to ​Liverpool, but Lampard remained committed to Abraham, and it certainly paid off.

Against ​Norwich, Abraham was electric. His movement – something which Giroud cannot offer – was superb, and he finally got the goals he deserved.

His first goal was a perfect example of what Abraham can bring to the side. He began by holding the ball up for the equally impressive Mason Mount on the halfway line, before setting off for the penalty area. He was found by ​Cesar Azpilicueta’s cross, and he connected with a technically stunning volley to send Blues fans into a frenzy.

Neither of ​Chelsea’s alternative forwards could have done that. Giroud wouldn’t have moved around the pitch enough to get involved, whilst ​Michy Batshuayi would have likely found himself in the wrong position.

Abraham offers everything that Giroud and Batshuayi can do, but he can do it all better. He has speed, strength and intelligence in abundance – if you built the perfect striker, you’d likely come up with something close to him.

He now needs the chance to build on this, and a consistent run of games in the starting lineup would give him exactly that. Lampard mustn’t try to bring in Giroud or Batshuayi for rotation, and instead allow Abraham to build up some momentum. Once he gets going, he’s almost impossible to stop. There’s a reason he’s the ​top-scoring Englishman since the start of last season – defenders just can’t deal with him. When he’s feeling it, he’s really feeling it.

It’s clear that neither Giroud nor Batshuayi is the future of Chelsea. The former is 32 years old, whilst the latter has failed to impress three consecutive managers at Stamford Bridge. Fortunately, the future is bright, because the future is Abraham’s to define.

Abraham scores goals, and Lampard must let him do so.