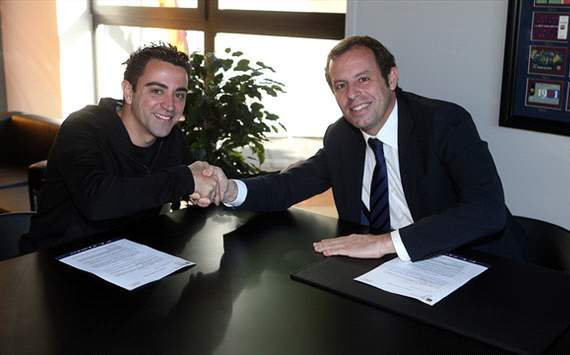 Xavi has signed a new contract with Barcelona until June 30 2016, the club have confirmed.

The midfielder, who turned 33 last Friday, agreed to extend his current deal by two years back in December, and has now officially put pen to paper.

Carles Puyol signed his own extension until 2016 on January 22, but Lionel Messi is yet to make his commitment to the club – this time until 2018 – official.

The Blaugrana are preparing to face rivals Real Madrid in Wednesday night’s clasico, and Xavi had earlier stated that he remains fearful of what los Blancos are capable of.

“These games are always unpredictable. We are really in good shape to compete right now but anything can happen in football, and particularly against Real Madrid,” he told the Times of India.

“They will be missing a few important players, but they are Real Madrid after all and they will compete well, I’m sure. Despite their current situation, they are a dangerous opponent.”

The first leg of the Copa del Rey semi-final first leg kicks off at 21:00CET at the Santiago Bernabeu on Wednesday.