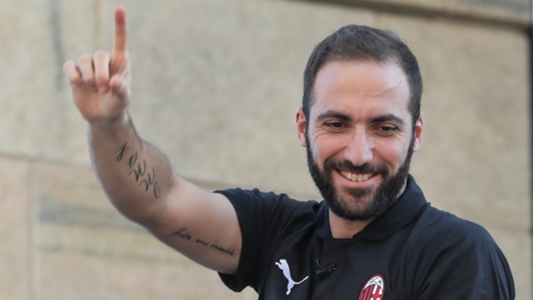 Gonzalo Higuain believes he and AC Milan can bring out the best in each other to “achieve great things” since his arrival from Juventus.

The striker moved to the Rossoneri on loan from the Turin side together with Mattia Caldara, while Leonardo Bonucci went the other way.

Chelsea approached Juve over the Argentina international, but he opted for the San Siro club because he felt Maurizio Sarri was the only one at Stamford Bridge who wanted him.

And the 30-year-old believes he made the right choice, as he sees a bright future ahead for himself and his new team.

“First of all it was Leonardo who convinced me with the very nice things he said about me,” Higuain told DAZN . “Then also the coach as well as the club for investing in me.

“This is a team that, in my opinion, can achieve great things. A team with the characteristics that can allow me to be at my best. As well as the challenge of, along with my team-mates, bringing Milan back to what it was, meaning reaching as high as possible.

“I feel a deep joy, to stay at AC Milan makes me proud. I hope to earn all this trust, I’m very faithful about this new adventure.”

Fellow new arrival Caldara also hopes to lift silverware with Gennaro Gattuso’s team after being convinced to make the switch.

“It’s the first time I’ve had such a feeling, I didn’t expect such a joy, I’m glad to be here,” he said.

“I hope I can win something with AC Milan, as I haven’t won anything yet.

“I think I’m in the right place at the right moment. AC Milan called me up and you can’t say no to AC Milan.

“Gattuso didn’t struggle to convince me.. he phoned me, he told me there’s a lot to work but also a desire to have fun.