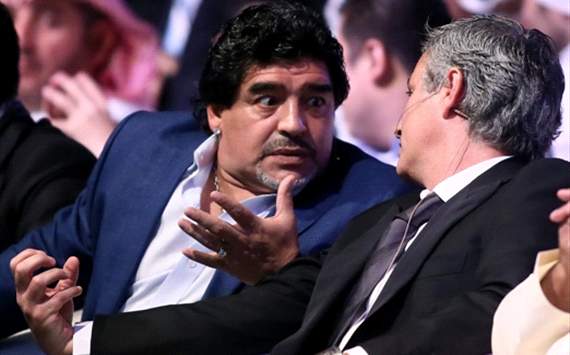 Real Madrid coach Jose Mourinho doesn’t owe anyone an explanation for dropping Iker Casillas in his team’s 3-2 loss to Malaga, according to Diego Maradona.

The Spain international was surprisingly snubbed by the Portuguese in favour of understudy Antonio Adan for the visit to Andalusia, and los Blancos‘ defeat saw Barcelona increase their lead over the Spanish capital club in La Liga to 16 points.

The Argentine legend, who is currently unemployed after leaving his position at Al Wasl, thinks that Mourinho should be able to pick whoever he wants, even if that means omitting the club captain.

“I think it is great that Mou benched Casillas. Mourinho is the boss. It is done and it does not matter whether he won, lost or drew,” the Argentine told reporters in Dubai, at a press conference which Mourinho was also attending.

“I’ll give you an example. Arbeloa has nothing in comparison with Dani Alves, but he is playing at Real Madrid. And who has questioned him? How many goals has Arbeloa scored? How many shots has he had? Let’s see who has the best team player-by-player and then talk.”

The former Napoli star also hailed Mourinho as a truly brilliant coach, and said he sits at the very top of his profession alongside former Barcelona boss Pep Guardiola.

“I think Mourinho is a phenomenon,” Maradona added. “Along with Guardiola, he has demonstrated personality and ideas. They have everything you require in a technician to lead a group.

“And it is not easy, it is very difficult to gather many heads in a dressing room, as confusion can enter and make it is much easier to lose a game.”

Mourinho’s men currently sit well behind Barcelona in La Liga at the halfway stage of the campaign, and Maradona revealed that he expected such a dip in form.

“Madrid always have a physical slump and then suffer,” the former Blaugrana attacker continued. “But that does not happen with Barcelona.”