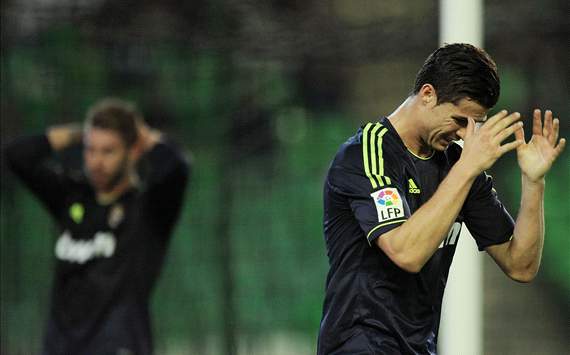 Real Madrid defender Sergio Ramos believes that luck abandoned his side during the 2-2 Liga draw against Espanyol on Sunday.


Goals from Cristiano Ronaldo and Fabio Coentrao looked to have given los Blancos a vital win, but a late Juan Albin header snatched a point for the visitors.

However, experienced centre-back Ramos is adamant the team was just unfortunate to not secure three points after dominating most of the match.

“The draw today was not a matter of attitude, from the first minute we were looking for the victory,” the 26-year-old told reporters.

“Now it is easy to draw conclusions, and in football the result counts. Physically we’re fine and the problem today was not a lack of attitude, and the coach may think the same.

“We’ve had luck in other games, but not today.”

Meanwhile, Iker Casillas has called on his team-mates to put the disappointment behind them and focus their attentions on beating Malaga in their final game before the Christmas hiatus.

“Today we have to step back. The situation we have is not favorable. We left two points behind. We can not be so far away from Barcelona,” he added.

“Now have to continue and think about the match against Malaga, win and again claim victory.”

Youngster Jose Callejon voiced his belief that his side dominated their Catalan counterparts throughout Sunday’s match, but suffered from bad luck.

“We are sad because we miss more points. We always want to do well and win, but things are not going our way. We dominated, but were well match.”

“We’ve bad luck and good chances but did not use them. We have to pull ourselves together and give a 100 per cent to get out of this situation.”