​Maurizio Sarri has endured a challenging debut season with Chelsea, and reports from Italy have suggested that he could soon be shown the exit door at Stamford Bridge and replaced by Derby County manager Frank Lampard.

Sarri has divided the opinion of fans this season, with many supporters choosing to get very vocal in their frustrations towards the manager at various stages of the season. 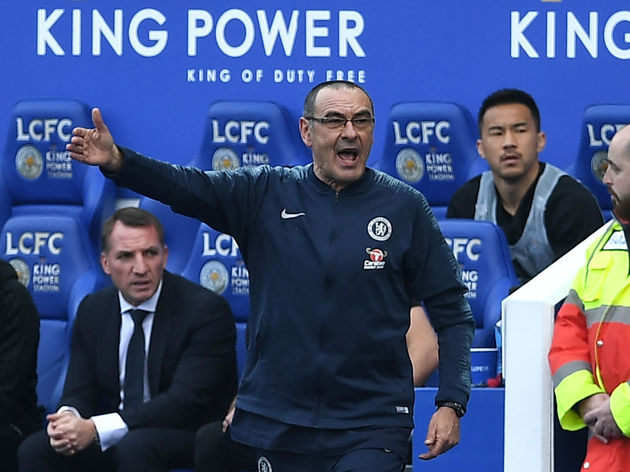 According to ​Sport Mediaset, owner Roman Abramovich is not convinced that Sarri is the man for the job, and is keen to boost morale at the Bridge by hiring club legend Lampard.

Abramovich is said to be concerned that Sarri’s tactics will never work in the ​Premier League, and the relationship between the manager and the fans has also given the Russian billionaire second thoughts about keeping Sarri on.

He does not want to create another lengthy saga by sacking another manager, such as after Antonio Conte’s dismissal last summer, but the fact that Sarri would be keen on a return to Italy would make the decision to replace him far easier.

Sarri would be open to trying his hand back in the ​Serie A, with both Roma and ​Milan​ understood to be readying offers for the ​Chelsea boss if he becomes available.

Many Blues fans have doubts about Lampard’s suitability for the role – he has just one season of management under his belt with ​Championship side ​Derby – but what is not up for debate is the Englishman’s status as a club legend who could help boost morale.

He is the club’s all-time leading goalscorer with 211 goals, and is one of the most popular figures in club history. Abramovich is said to believe that bringing Lampard to the dugout at Stamford Bridge would be a hugely popular decision amongst supporters, as they look to bounce back from a tumultuous season. Despite all the speculation surrounding Sarri’s future, the Italian actually enjoyed a relatively successful season. He helped guide the Blues to the finals of both the Carabao Cup and Europa League, and even masterminded a third-placed finish in the ​Premier League, bringing ​Champions League football back to the club.

However, even with these accomplishments, Sport Mediaset claim that Sarri is on borrowed time at Chelsea, and Lampard could move to the club as soon as the Europa League final is over.