Kits. Shirts. Jerseys. Threads. Whatever you call them, there is one thing we can all agree on – they are *the* *most* *important* thing in football.

But, even *more* important than that is the ranking of said kits. It’s a big task, make no bones about it, but it’s also imperative. Too many have tried. Too many have so abysmally failed. So, here, at last, is your DEFINITIVE top 20 home kits (or ‘jerseys’ – we’re all friends here) of the Premier League era.

Some disclaimers right off the bat. 1) One kit per club, otherwise it just gets messy. 2) ONE KIT PER CLUB. Right. Let’s GOOOO. What a place to start. This perfectly summarises everything we’re looking for – invention, class, subtlety, ingenuity etc etc. Some QPR fans consider the preceding cut from 1994/95 to be superior, but that’s just insanity, IMHO.

Though that edition was pretty similar, the badge was not centralised, and that makes it plainly inferior. But also, just look at that blue. Undoubtedly, Manchester City’s greatest look came in the years 1997-99 (we’re talking Kappa sleeves and everything). Unfortunately, they were in the second division at that point (tinpot). Thankfully, though, they briefly returned in the 2000/01 season to deliver a true classic, before promptly plummeting back to the depths.

But the kit. Let’s talk about the kit. Gorgeous, isn’t it? Subverting the usual mundanity of that one-tone Sky Blueness, the Citizens plumped for a generous coating of white on the sleeves, alongside a deeper blue to create a flash-in-the-pan masterpiece. In case you’re wondering, no not every single one of these will have centralised logos, but it helps. Robbie Savage’s flowing locks? I mean, they didn’t come with the kit, but check. As you’ve seen so far, the legacy of a shirt is not always intrinsically linked with team success, but it is when you look at this Fulham kit from the summation of the first decade of the 21st century.

It was a time of unbridled prosperity for the Cottagers. A time of Bobby Zamora, Roy Hodgson, Clint Dempsey, Andy Johnson, Dickson Etuhu, Damien Duff and Zoltan Gera. A time of FIFA 10 free-kicks with Danny Murphy. A time of Juventus triumphs and Europa League finals.

And all that was made even more poignant thanks to their wonderfully woven threads. If I was given a choice of Brad Pitt, Leonardo DiCaprio or Tim Cahill to parade down a catwalk in this outfit, be it laid down on Goodison Park or otherwise, it would be Timmy C every day of the week.

Has one man not named David Ginola ever looked so good in a kit? I doubt it. And that’s as much down to the kit as it is the man himself. An intoxicating combination. Yes, we’ll get to the pinstripes, and how impressively Nottingham Forest pulled them off, in a minute. But for now, let’s marvel at this kit in totality. Take the red strip at the bottom of the shorts and the reverse embroidery at the top of the socks. Exceptional.

But, as alluded to, it is all about the pinstripes. Those darned controversial, alluring pinstripes. Many have tried to incorporate them, many have emerged with thin, orderly lines of egg on their face. But in the 1992/93 season – yes, they were relegated, of course they were – Nottingham Forest executed the design with pure panache. 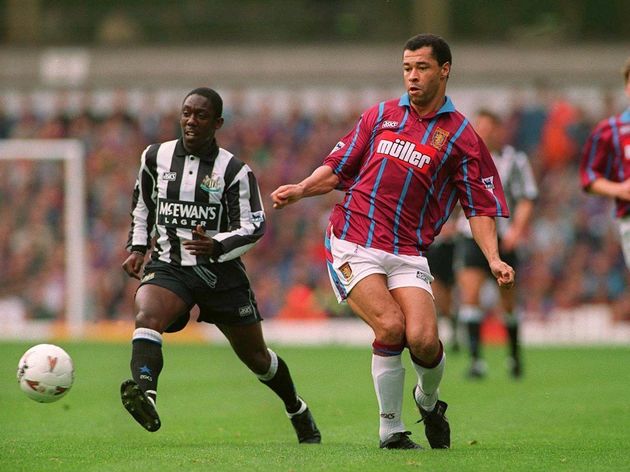 Ignore the impending ACL injury that’s about to occur in this photo (I’m sure he was fiiine), and instead immerse yourself in the intricacies of this cracking offer from the Villans.

I know, the ‘Müller’ logo shouldn’t work with the Claret and Blues’ signature colour palette, especially with one as Claret heavy as this one, but it somehow does, doesn’t it? Wow. Look at that. Jarring at first, perhaps. But stare deeper. Lose yourself in the abstract stripes that lead nowhere, obeying no rules or regulations.

Don’t focus on the strangeness of the word ‘Dimplex’ and then say it over and over again in your head till it’s ringing, no, look past the inopportune sponsorship deal of the time, and instead marvel at that walking art exhibition of a shirt. And don’t sleep on the shorts. Coventry City have been through hard, hard times since they graced the footballing world with this Gallic beauty.

From their ill-advised follow-up to said beauty, where they swapped the gravitas of Peugeot for the boy-racer brashness of Subaru, and shoved a shirt-sized badge in the background, to, you know, plummeting down the Football League, it’s been a difficult 20-odd years.

Clearly, that’s the price of greatness. It’s Icarus all over again. ​Crystal Palace went full Bayern Munich here (especially when accompanied with the white shorts, which we couldn’t here, because all of the pictures contained a combined singular pixel), and it was an utter treat.

Sure, a bit like City’s 2001 effort, it did not portend to on-field success – the Eagles were instantly relegated after their triumphant promotion campaign the year before – but still, talk about going down fighting. Yes, the badge might be a tad oversized, but that oversight becomes overpowered when faced with the cosmopolitan wonders of that TDK logo combined with the adidas stripes, especially those tricolor-like ones on the shorts. Magnifique.

They may have been relegated to the Championship, but they did it in a Champions League kit. The difficulty in executing a successful homage kit in football cannot be underestimated, which is why this stunning offer kicks off our top 10.

I won’t lie, Leeds have had some corking kits – from the yellow-striped classic from the two years prior to this one, to the Hypebeastified Strongbow shirt at the turn of the century – but it’s this one that nabs the title. Just look at the badge. Christ. Tottenham’s best kit, and it wasn’t even close until Nike came to sort it out in 2017. Still, what a glorious kit that is, made even more glorious by the grade A lid David Ginola was sporting throughout his Spurs career.

Also, Holsten is a Hall of Fame sponsor, thank god the club saw the error of their ways when they momentarily swapped it for Hewlett Packard back when their logo was a wordy eye-sore. Now, normally you want to isolate the kit in question as much as you can, and there are probably better examples of why this Sheffield Wednesday number is so worthy, but, for my money​, none show this fact more than this one.

Because just look at that Sheffield United monstrosity. If you were thinking this is all just 90s nostalgia, then think again, because I never want to remember that. Also, as an aside, no this is not a Testimonial, this is an FA Cup semi final and that old bloke is an actual player. Some ​Liverpool fans stan for the infamous v-neck of 1995/96, probably because of its presence in that infamous 4-3 comeback against Newcastle, but its thickness around the neck makes me sweat every time I see it.

This one, on the other hand, feels like the perfect balance between comfort and style. Plus, you have the classiness of that green finish at the top of the collar and the end of the sleeves – so festive! – and the biggest adidas stripes you’ve ever seen plastered down each side. Winner. No, it may not have the title-winning credentials of 2003-05, or the Autoglass and Gianfranco Zola-ness of 1997-99, but it has everything else.

From a pre-rounded, pre-completely altered badge, to a collar in the last season you could really get away with one, this is a wonderful conception, and hangs effortlessly on the greatest goalscoring midfielder the ​Premier League has ever seen. What a timeless, timeless design. Yes, it’s imbued by the fact that Alan Shearer and co won the title in iconic style wearing it, but still, what a shirt. Shoutout to Asics. They may not have made many football kits, but when they did…oof.

And, if you think it’s hard to go wrong with such a colourway, then take a look at the 20 odd kits the club have made since. Horrendous. The perfect distribution of colour? Check.

Have you ever seen a more West Ham kit in your life? Has a kit ever defined a football club so well? No and no. Of course, there are many, many iconic ​Manchester United shirts, but none match the ingenuity and invention of this one. You can take the simplicity of the Vodafone years at the turn of the century, or the laced up collars of the first years of the Premier League era, but neither of them contain a superimposed image of Old Trafford, do they?

Yes, it may be subtle, and therefore tough to see here, but you can still just about see the outlines. Well before its time, and none of the copycats have been able to match that subtlety since. The thing is, right, it’s really hard to make a novelty kit work. In reality, it should never work, and I understand those Gooners who disparage this shirt because it’s not ‘proper’ Arsenal – there are many great ‘proper’ Arsenal shirts. Many.

The problem, though, is that none of them are as good as this. None of them. Just look at Thierry Henry – this is as good as it gets. Well, almost. ​Ladies and Gentleman, I give you the greatest kit of the Premier League era. In reality, it’s not even that close.

You do not get more iconic than this, so drink it it in, savour it, study every detail, because you will never see stitching like this again. Never. You could write a 10,000 word thesis on the Newcastle Brown Ale logo alone, and a chunk more on the aesthetics of the retro adidas sign in conjunction with the Magpies’ famed black and white stripes.

I need a cold shower.